Recent Posts
Film Trailer About The Birth, Rise, Fall and Rebirth Of Industrial Scene
Was Screened For Audiences Throughout November
Bonus Clip Featuring Ministry’s Al Jourgensen Released Today
Film Now In Final Round Of Funding Via Kickstarter
19 Days Left To Reach Financial Goal, With Special Perks For Contributors
www.IndustrialMovie.com
“Film tells the story of a time, place, a scene—that changed the global underground.” 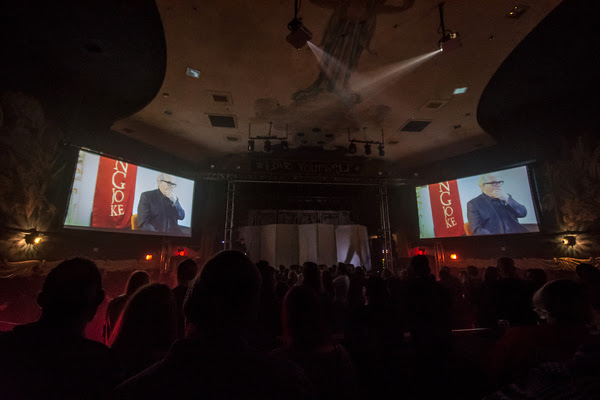 (Live at the Granada Theater in Dallas, TX; photo by Danesh Kothari)
CHICAGO, IL – Thirty-five years in the making, a documentary film exploring the birth, rise, fall and moderate rebirth of American industrial music is nearing completion. Called “The History Of Industrial Music,” the film explores the mid-to-late 1980s birth of a form of aggressive dance music that incorporated sampled noises, synthesizers, howling vocals and big dance beats.
With industrial supergroup Pigface’s first tour in 14 years, band leader Martin Atkins asked filmmaker Chris Harris to join the band on the road and present the trailer to hungry crowds each night on the tour in an old roadshow-style presentation of taking it to the masses, culminating with a sold-out show at Thalia Hall in the scene’s homebase in Chicago.
“Chicago industrial music is on the rise right now—the remembrance of a time when things changed for good. Chris Harris has captured that feeling and added to the soup of documentation that informs and defines this special time,” says Atkins. “Industrial music was the reason I moved to Chicago in 1989 so this has special resonance for me. I’m so happy to see this all come to fruition.”
Adds Harris, “When Martin mentioned, ‘Hey, what if you came out and played the trailer every night before Pigface goes on,’ I took a moment and thought that was brilliant. It was great to see the rousing response the screenings had as well as to talk to people across the country and hear how excited they are about the film.”
“The History Of Industrial Music” talks to the players who were there: Al Jourgensen (Ministry/RevCo), Joe Shanahan (Metro/Smart Bar), Jim Marcus (producer/Die Warzau), En Esch (KMFDM), Marston Daley (aka Buzz McCoy of Thrill Kill Kult), Jason Novak (Acumen/Cold Waves Festival), Reid Hyams (Chicago Trax) and Martin Atkins (Pigface/Killing Joke), just to name a few.
As a special holiday treat, a bonus clip is released today, December 3, featuring Ministry’s Al Jourgensen talking about the immediate days after releasing album “With Sympathy” and returning to work at WaxTrax! Records. See it here: https://youtu.be/C9pWw80l3vo Harris has assembled a team of production veterans who have worked on previous music docu-series and for networks such as HGTV, Discovery and more.
The film’s Kickstarter has 19 days left to reach a goal of raising $23,900; it is currently over 60% funded. The funding will go mainly to music licensing as this story is incomplete without the soundtrack it created and donators will be given special perks outlined on the web page.
“The History Of Industrial Music” Links
Trailer: https://www.youtube.com/watch?v=KbFt-UPoNeQ
Kickstarter: www.IndustrialMovie.com
Facebook: https://www.facebook.com/HOIMTheChicagoWay/