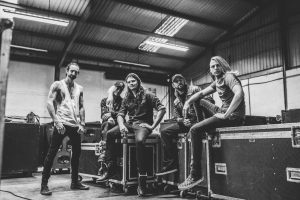 Influenced by classic bands of both the past and present, but with a modern edge added to the mix,

Starting out in the Cambridge area, the group have worked their way up the ladder to headline in cities

such as London, Manchester, Newcastle, Sheffield and Nottingham, while support slots have included a

well received UK tour with The New Roses in the autumn of 2018.

The Brink signed to Frontiers in 2017 and are now set to release their debut album, ‘Nowhere To Run’,

which has been produced by Nick Tauber (Thin Lizzy, UFO, Marillion). Weaving delicate vocal and

instrumental harmonies around driving rock riffs, the record is packed with fist-pumping anthems and

enticed fans from a variety of rock genres.

Singer Tom Quick states that the lyrics have “a theme of unity and compassion, and an understanding

that no matter who you are, there is always a place for you in this world. The songs are written from the

listeners will be able to relate to what we are talking about and be inspired by it.” Musically, he continues

As for the new single, ‘Break These Chains’, Tom explains that the song “was inspired by friends of band

bassist Gaz Connor, who “both had very strong work ethics in well paid jobs, but they never felt it was

paying off and they knew there had to be more to life. They had to break the chains that bound them.

Lexi [Laine, guitarist] wrote a hard hitting riff to back up the message behind the lyrics, to really make

them come to life and tell the story.”

Backed up with an exciting live show full of youthful vivacity, The Brink belong on the stadium stage.

Meanwhile, they can be seen on tour again in March :