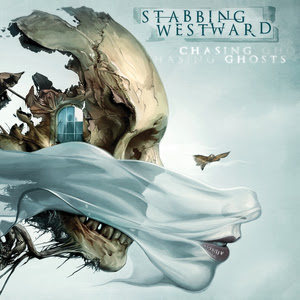 It’s been 20 years since the last full-length Stabbing Westward album came out in 2001, and the wait is finally over as the band today announces details for their much-anticipated new record. Chasing Ghosts will be out March 18, 2022 via COP International Records, featuring 10 tracks that have the industrial rock band’s characteristic sound with a modern sheen that picks up right where they left off.
In celebration of the news, Stabbing Westward gives a taste of the upcoming material by sharing single “I Am Nothing” alongside a new lyric video. See it here: https://www.youtube.com/watch?v=DCFuHcXRMos
A number of limited-edition physical copies for “I Am Nothing” are available for sale here: https://stabbingwestward.bandcamp.com/album/i-am-nothing
Chasing Ghosts will feature brand-new songs as well as re-workings of the band’s acclaimed 2020 reunion EP Dead And Gone that finds original founding members Christopher Hall (vocals/guitar) and Walter Flakus (keyboards/programming) honing in on the incredible partnership that once produced a string of hits that dominated alternative radio and film soundtracks, including “Shame,” “Save Yourself” and “What Do I Have to Do?” – and resulted in two Gold records.
To recreate that original chemistry, the band recruited the legendary producer John Fryer to again helm Chasing Ghosts. Fryer, whose production credits include Depeche Mode, Nine Inch Nails, 4AD, Cocteau Twins and Love and Rockets, originally worked with Stabbing Westward on their best-selling early releases Ungod (1994) and Wither Blister Burn + Peel (1996). Chasing Ghosts was also mastered by Tom Baker who, like Fryer, worked with Stabbing Westward on their early releases and is part of the reassembled production team on the latest album. The current Stabbing Westward band lineup includes Carlton Bost (guitars and programming) and Bobby Amaro (drums).
Says Walter Flakus, “It seems like we’ve been working on this album for a long time, trying to get it just right. With the help of John Fryer and COP International, everything fell into place. We are so excited for the world to finally hear the album. The single ‘I Am Nothing’ is just the tip of the iceberg.”
Adds Christopher Hall: “It’s great to be back, and working with John Fryer and Tom Baker again was awesome and felt like making a pure old-school Stabbing Westward album. I am excited to see how people will receive the new songs.”
Presales for Chasing Ghosts will begin in early January and fans are encouraged to sign up now for e-mail reminders HERE. The album, featuring artwork by David Seidman (an artist who has also worked with Coheed And Cambria and is known for his ethereal and surrealistic imagery) will be available in digital, CD and vinyl formats, with full details and exclusive, limited-edition merch to be announced soon.
The full track listing for Chasing Ghosts is as follows:
In addition to recently being covered in Loudwire, Consequence Of Sound, Revolver, SPIN, Bloody Disgusting and other top media outlets, Stabbing Westward has been receiving rave reviews for their latest material:
The Dead and Gone EP ultimately proves how memorable Stabbing Westward’s industrial rock can be, and it serves as a teaser for a looming full-length album that many are anticipating… they sound just as passionate and exciting as ever.” —Blabbermouth
For both casual listeners and ardent fans of the group, the fire is raging inside Stabbing Westward as the collective enjoys this new chapter in its history.
—MXDWN
Stabbing Westward have done themselves proud with the Dead and Gone EP. It whets the palate and excites the senses, reminding fans that this band are still making vital and fresh new music—and it’s totally worth the wait! Dead and Gone is the promise that Stabbing Westward are back with a fiercely infectious vengeance!
—Cryptic Rock
Stabbing Westward by Erica Vincent
About Stabbing Westward
Blending the scathing electronics of underground industrial/rock with the emotive melodies of goth and a decidedly radio-friendly sensibility, Stabbing Westward rose to great heights in the mid-‘90s alternative boom. Formed in 1986 by Walter Flakus and Christopher Hall, the band went from underground cult sensation to the heights of critical and commercial success thanks to such songs as “Shame,” “Save Yourself,” “So Far Away” and “What Do I Have to Do?”. To this day, these songs remain anthems of heartache, dejection, rage, betrayal and depression. With two Gold albums and numerous hit singles, Stabbing Westward fell from grace with the 2001 self-titled album amid personal and professional turmoil, disbanding the following year and leaving a void in modern music that was somewhat filled by Hall’s later work in The Dreaming. However, it was the release of that band’s Rise Again in 2015 that the seeds were sown for a reunion. That album saw Flakus once again making music with Hall, with Stabbing Westward guitarist Mark Eliopulos joining The Dreaming onstage in Chicago for a set of past hits. In 2019, Hall and Flakus came together again to release the Dead And Gone EP, the first new Stabbing Westward material in 18 years. Written and produced by Flakus and Hall over the course of three years, and recorded in multiple states and time zones, these new songs capture the very essence of the Stabbing Westward sound. Adding longtime bandmate Carlton Bost (Orgy, Deadsy, The Dreaming) and new drummer Bobby Amaro (Orgy) to the official lineup, the band has also once again recruited the talent of producer John Fryer—instrumental on early albums “Ungod” and “Wither Blister Burn + Peel”—for a new album, Chasing Ghosts to be released in early 2022 through a new partnership with COP International.