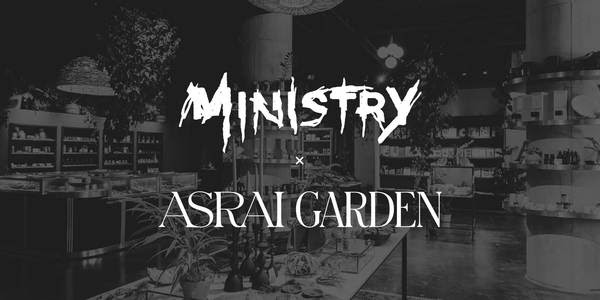 To celebrate the release of the new fully authorized visual history book Ministry: Prescripture on December 6, band leader and mastermind Al Jourgensen announces an appearance for one exclusive book signing alongside author and designer Aaron Tanner on Friday, December 13. The event is open to the public and will be held at Asrai Gardens West Loop (inside the Ace Hotel) in Chicago beginning at 6 pm. After the signing, there will be an afterparty at a secret nearby location with DJ Scary Lady Sarah spinning industrial, gothic and new wave tracks from 8pm to midnight.
Tickets are free but attendees must register here:
https://www.eventbrite.com/e/ministry-book-signing-with-al-jourgensen-and-aaron-tanner-tickets-77523066579
Only 2,000 copies will be printed of the limited-edition book that includes 248 pages of anecdotes from Ministry’s music contemporaries plus rare and unseen photos, artwork and other ephemera that spans Ministry’s entire career. A deluxe edition includes a 7” of the studio version “(Every Day is) Halloween (Acoustic)” featuring Dave Navarro. Read more about the book via Rolling Stone here. It’s the ideal holiday gift for music fans and collectors. There will be 200 copies available for purchase at the December 13 event, and out of town fans can also purchase copies at this link:
https://www.melodicvirtue.com/collections/ministry
Asrai Garden started in Chicago’s Wicker Park neighborhood 20 years ago and is as rooted in Chicago’s culture as Ministry where Jourgensen started the band and lived for many years. This celebration of local brand and band uniting in 2019 to mark the occasion of a new store and new book is furthered by a limited-edition commemorative candle only available for purchase at the store on December 13. Created in collaboration with Al Jourgensen, it has notes of frankincense, myrrh, tobacco, smoke, and patchouli, and will burn for approximately 50 hours. Only 50 candles will be available.
Chicago’s Kuma’s Corner is also joining in on the celebration at their nearby West Loop location by re-launching the infamous Ministry burger during the week of December 9-13. The 10-oz. beef patty (or choice of protein) is topped with bacon fat aioli, applewood smoked bacon, fried smoked gouda cheese, caramelized vegetable medley, red wine gravy and fresh thyme.
Also released today is Ministry’s campaign video encouraging Americans to get out and VOTE in the upcoming 2020 election season. Since the origins of the band in the ‘80s, Ministry has been a fervently political group with Jourgensen’s lyrical exposés about the Bush era to the current day Trump regime. Ministry’s most recent album, AmeriKKKant, began Jourgensen’s rally against the current state of affairs—and will only ramp up in the 2020 election cycle. See his voter call to action in the video below and look for more to come. Find Ministry on tour this fall. The band will join Slayer on the thrash metal band’s final dates of its Farewell World Tour. Kicking off November 2 in Asheville, NC and wrapping up in Los Angeles onNovember 30, “The Final Campaign” is the seventh and last leg of Slayer’s goodbye tour. Ministry will appear on all 18 dates alongside additional support acts Primus and Philip H. Anselmo & The Illegals. In addition, Ministry has several headlining dates on the trek and each will include songs from “The Mind Is A Terrible Thing To Taste,” which marks its 30th anniversary on November 14.
Find all ticketing info at www.ministryband.com.
NOVEMBER
1   Vinyl Music Hall, Pensacola, FL *
2   Explore Asheville Arena, Asheville, NC
3   PNC Arena, Raleigh, NC
5   Salem Civic Center, Salem, VA
6   Giant Center, Hershey, PA
8   Mass Mutual Center, Springfield, MA
9   Madison Square Garden, New York, NY
11  KFC Yum! Center, Louisville, KY
12  Nationwide Arena, Columbus, OH
13 The Machine Shop, Flint, MI*
14  TaxSlayer Arena, Moline, IL
15  Denny Sanford Premier Center, Sioux Falls, SD
17  Fargodome, Fargo, ND
18  CHI Health Center, Omaha, NE
19  Granada Theatre, Lawrence, KS*
20  Broadmore World Arena, Colorado Springs, CO
22  First Interstate Arena at MetraPark, Billings, MT
23  Revolution Concert House, Garden City, ID*
24  Spokane Arena, Spokane, WA
26  Oracle Arena, Oakland, CA
27  Grand Garden Arena, Las Vegas, NV
30  The Forum, Los Angeles, CA
*Ministry Headlining Date
ABOUT MINISTRY
Born in 1981 in Chicago, Ministry has been the lifetime passion project of founder Al Jourgensen, considered to be the pioneer of industrial music. In its early days, Ministry was identifiable by its heavy synth-pop material in line with the new sounds and technology that were being developed in the ‘80s. Ministry’s output began with four 12” singles on Wax Trax! Records in 1981 before the first LP With Sympathy in 1983 via Arista Records. As time progressed however, so did Ministry, quickly developing a harsher, and more stylized sound that the band soon became infamous for on seminal albums Twitch (1986), The Land of Rape and Honey (1988), and The Mind Is A Terrible Thing To Taste (1989). With the release of Psalm 69: The Way to Succeed and The Way to Suck Eggs (1992), Ministry hit an all time high in the mainstream musical realm and received its first Grammy nomination. In total, Ministry has been nominated for a Grammy award six times. After an indefinite hiatus in 2013, Ministry’s latest album, 2018’sAmeriKKKant, continues to reflect Jourgensen’s views on the frightening state of society and politics. With the latest lineup featuring Sin Quirin and Cesar Soto on guitars, John Bechdel (Killing Joke) on keys, Derek Abrams on drums and the newly appointed Paul D’Amour (Tool) on bass, Ministry continues touring and recording in 2019 with new music and a few more surprises planned.
Website: www.ministryband.com
Facebook: www.Facebook.com/WeAreMinistry
Twitter: www.Twitter.com/WeAreMinistry
Instagram: www.Instagram.com/WeAreMinistry

Concluding The Band’s “Riff Of The Week” Series   Fans Are Encouraged To Continue Submitting Video Responses To “Alert Level” Answering “How Concerned Are You?”   Al Jourgensen Remains In #StudioQuarantine Working On 15th Studio […]

Sin Quirin is a man of man of many jobs. There is of course Ministry, then there is 3 Headed Snake, and Lords of Acid. Marieke Bresseleers joined Lords of Acid during the recording of […]