Recent Posts
(Photo By Karen Mooreside)
Via Metal Injection
New Single Takes A Stand Against Religious Control
And Comes From Latest Album Gorgo
Out Today Via Cleopatra Records
Acclaimed Theatrical Musical Project Hailing From Los Angeles
Offers A Trademark Blend Of “Deathtronica” That Combines
Electronica And Black Metal Without The Use Of Guitars
Provocative Black/Bass/Metal duo LUNA 13 return today, on the 13th of September, to bring their latest sonic assault with the gripping new single “Hear My Call” accompanied by a harrowing music video directed by Vicente Cordero (Stabbing Westward, Filter, 3TEETH) that is premiering on Metal Injectio. Read the article here: https://metalinjection.net/video/luna-13-takes-a-stand-against-religious-control-with-new-single-hear-my-call
See the video for “Hear My Call” here: https://youtu.be/49AWwpLnNhY
Filmed inside a cryptic church and featuring blood-filled vignettes and haunting invocations, the video is a bold art piece that showcases LUNA 13’s strong stance on the ills of religious control.
As frontwoman Lilith Bathory told Metal Injection, “’Hear My Call’ begins with Lilith calling Lucifer, to stand with her against the rampant atrocities carried out by religion and those who use their faith to control, oppress or kill. It asks everyone to open their eyes to how these corrupt systems, and how they are used, end up killing us all.”
“Hear My Call” is the new single from the dark lord duo’s brand-new album Gorgo also released today on Cleopatra Records featuring nine tempting new tracks (including a cover of Lil Nas X hit “Montero”) that further LUNA 13’s reputation as one of the most attention-grabbing metal acts to hit the scene.
It follows last November’s lauded release for album God.Dis that thematically covered the grounds of witchcraft, nuclear war and modern conspiracy theories and a release that Sonic Perspectives deemed “feels both simultaneously ethereal and omnipresent.”
Previous videos have included “Cursing The Sky” (premiered via Outburn) and “Sacrificial Lamb” (premiered via Decibel) as well as “Sekhmet” (premiered through Knotfest.com) and additional acclaim has come from the likes of Playboy to The Pit.
One of the LUNA 13’s curious hallmarks is crossing over from electronica to black metal and industrial rock without the use of any guitars, which has some hailing the act as “the bass music scene’s Slayer.” Dr. Luna creates the voluminous sound solely with synthesizers and distortion pedals by wrapping heavy distortion around sub-bass. Frontwoman Lilith Bathory further brings a spectacle with brutal vocals and trance-inducing dance moves behind devil horns.
With a gripping aesthetic paying homage to domination and the occult and a strong live show heavy on theatrics, LUNA13 has become a favorite attraction in hallowed Los Angeles where they hail from as well as a memorable opening act for death metal, industrial and electronica projects including Possessed, Insane Clown Posse, Doyle, Skin Lab, Insomnium, Skold and Mushroomhead. Look for more tour dates coming soon. 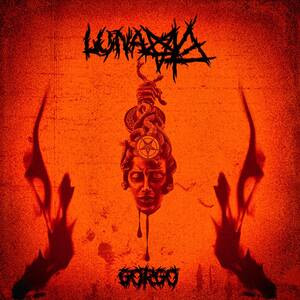 FOR IMMEDIATE RELEASE: January 20, 2022 – Provocative Black/Bass/Metal duo LUNA 13 have returned to bring their latest sonic assault, Gorgo featuring the single, “Hear My Call.”  LUNA 13 once again bring their curious hallmarks with the crossing over from electronica […]

Black/Bass/Metal pioneers Luna 13 are releasing their second single “Dig” from their upcoming album called Gorgo. The video combines haunting images with Luna 13’s signature sound. When asked about the video here is what vocalist […]