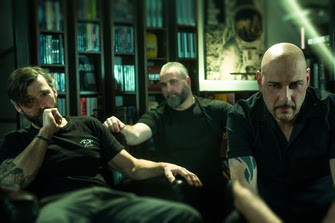 (Photo credit: Christoph Vitt)
Up-and-coming German electronic-alternative crossover act Johnny Tupolev has partnered with Sonic Perspectives to premiere the attention-grabbing video for their new track, “The Joy Of Not Knowing,” which will appear on their debut for global indie label COP International Records later this year.
The band offers a strong message in the song, warning society not to fall into the trap of believing misinformation. Says the band, “We live in a world where ignorance is bliss. Where lying, cowardice, laziness, and seeing only oneself and not the greater good has become the breeding ground for a very distorted view of reality, one that has given way to the conspiracy theories and half-truths appearing in this video. We hope it spurs the conversation for how we can find our way back to a society that honors authenticity and truthfulness in all forms.”
See the video for “The Joy Of Not Knowing” here: https://youtu.be/gU0plxNMEi4
Johnny Tupolev is made up of Tom Berger (vocalist, songwriter, guitarist, programmer), Jens Grebe (bass) and Dietmar “Didi” Noack (drums) who have crossover appeal in both electronica and alternative rock.
The name Johnny Tupolev also aims to connect both worlds—West and East—through a mix of culture and music in one universal language. While “Johnny” symbolizes American rock n’ roll and blues music, “Tupolev” refers to the electronic forms of pop music hailing from European inventors like Kraftwerk and CAN, referring to the band’s wholly unique sound that has been seen in various promos they have been teasing on social media.
In addition to the music the trio makes, the band also engages with visual creatives on their team, including Emmy nominated cinematographer/documentarian/music video creator Christoph Vitt and OSCAR® nominated Visual FX Supervisor Frank Petzold, both of whom worked with the band on the video for “The Joy Of Not Knowing.”
Johnny Tupolev’s upcoming debut for COP International Records will be released this year, helmed by the lauded John Fryer whose production credits include Depeche Mode, Nine Inch Nails and Love & Rockets. Fryer also acts as COP International’s A&R agent. The band’s addition to COP International Record’s roster furthers COP’s global presence with more international artists being added to the Oakland-based label family as it celebrates 30 years in 2021. 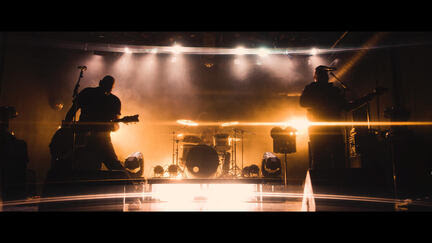 (Screenshot from “The Joy Of Not Knowing”)