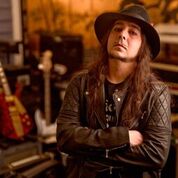 Los Angeles, CA (February 20, 2019) – Daron Malakian and Scars On Broadway have released “Guns Are Loaded,” the companion video to the blistering track found on SoB’s latest album, Dictator. The video was directed by Greg Watermann and can be seen HERE.

The video arrives as the band is gearing up for their first live shows of 2019, set to kick off March 3rd at The Observatory North Park in San Diego, CA.

About the meaning of “Guns Are Loaded,” Malakian told Rolling Stone, “the song is about a feeling of anger, a feeling of a breaking point, or times when the world is coming down on you.”

Dictator saw Malakian write, produce and play every instrument—including all vocals—over the course of a 10-day recording session. The album’s cover art was created by Daron’s father, Vartan Malakian.

About the album Revolver wrote, “It’s weird and outraged, political yet personal, catchy but mystifying in all the right and familiar ways. It’s enough to make any System fan very, very happy.” The Independentwrote, “Dictator is everything fans might expect from Malakian and more; a complex, thoughtful and invigorating album that nods to his own personal history and simultaneously links to the wider, tumultuous landscape of America.” Billboard, Loudwire, Uproxx and Decibel also sang the album’s praises.

Dictator follows Daron Malakian and Scars On Broadway’s critically lauded 2008 debut, which earned a four-star review from The Guardian. Entertainment Weekly hailed its “gloriously over-the-top heaviosity” and Guitar World described it as “deliciously hooky pop with a minor-key melody worthy of The Kinks or The Zombies.”

Malakian was recently featured in an episode of Ernie Ball’s “String Theory” that saw him discussing his love of music, his approach to songwriting and guitar and saw him playing song parts from System Of  A Down songs “Aerials,” “Toxicity,” “Lost In Hollywood,” “Suite Pee” and “Chop Suey” as well as Scars On Broadway’s “Guns Are Loaded,” “Universe” and “Angry Guru.” Click HERE to watch.

Don’t miss your chance to catch Daron Malakian and Scars On Broadway live. Dates are as follows:

On May 19th, the band will play the Sonic Temple Festival in Columbus, OH.