Baltimore was in for a wild ride.

Well it finally happened. Cradle Of Filth (Nuclear Blast Records,) came back to Baltimore with a promise to fans that they would not cancel the show this tour. Cradle had pulled out of their scheduled show the last few times they had come to town. So when fans saw that Bmore was a definite stop on their North American “Cryptoriana” Tour , they were more than eagar to hold COF to their word. This tour backs their twelth and latest album, Cryptoriana – The Seductiveness of Decay! with support from Wednesday 13 and metal new comers Raven Black (WURM group.) Baltimore was in for a wild ride.
I caught glances of faces covered in corpse paint
As I arrived outside Baltimore Soundstage, a little after doors open, I took notice of the massive camaraderie taking place before me. Folks stood around chatting about this and that, while others had a smoke before the show. Fans gathered together from all walks of life for one common goal that night, to rock the fuck out and have a good time. Inside, willing disciples swarmed about like a massive hive of black hornets, as others planted themselves at the barricade. I caught glances of faces covered in corpse paint, peeking through a sea of black band shirts and patched jean jackets. If you are a metal head, this was the place you wanted to be. If you enjoy succumbing to the screams of hell and surrendering your soul to its sweet melody, you were in the right place.

this girl was a sweet twist of feminine ferocity

First to lead the flock were California natives, Raven Black. Their unique brand of music, called dark metal carnival, was far from anything you could imagine. Fronted by a female, this girl was a sweet twist of feminine ferocity, wrapped in pigtails and power. If you haven’t had a chance to check out Raven Black, you may want to now.
Here check out their song “Dollhouse” below:
Like they stepped right out of one of their videos
Next to lead the lambs to their slaughter, were shock/rockers Wednesday 13 (Nuclear Blast Entertainment). Known for their mix of punk/glam and rock-n-shock horror imagery. It looked like they stepped right out of one of their videos. W13 came out dressed in full get up. Singing songs like “Hail Ming,” “Come Out & Plague” and “What The Night Brings,” set the tone for a night of mayhem and metal. As Wednesdays time came to a close, folks were reeling, but the excitement continued to rage. All knew that Cradle Of Filth was due to come out and the house was on pins and needles.

Dani Filth is a force to be reckoned with

For those of you who know who Cradle of Filth is, knows that front man Dani Filth is a force to be reckoned with. Filth’s screams are superior to many who receive high praise in the metal genre. Long time fans and dedicated followers were more than ecstatic to hear those vocals coming from the man himself. Dressed in all black, members of Cradle Of Filth walked out. Their painted white faces appear briefly as they walk thru the rays of colored lights on stage. The room is dark and foggy, except the crimson lights cutting thru from above. Filth was ushered in by an eruption of cheers as the intro “Ave Satani” prepared your psyche for “Guilded Cunt.” The weight of the room was heavy, as folks fell into the zone. That zone where, the music moves thru you, forcing everything inside to react. Take that build in the beginning of ” Heartbreak and Seance.” The gut wrenching guitar. Those haunting back vocals by bad-ass female multi-instrumentalist Lindsay Schoolcraft. That moment following when Dani Filths shredding-shrills pierce your soul.
With every song the darkness grew, the stench of evil lingered in the air, coaxing the pit to open up and come alive. Pit-goers thrashing and crashing about. In between songs, Dani Filth addressed the room and apologized to fans for cancelling the last few shows. It was a cool ass humble thing for them to do, even though they proved themselves more than worthy. COF went on to perform 16 songs in total. They closed out the show with an oldie but oh-so-goodie, “Her Ghost In The Fog” and the outro “Blooding The Hounds Of Hell.”
Check out these live photos from the show:

It ticked every box for a mosh-till-your-body-drops, scream/sing until your voice dies

From start to finish, this evening turned out to be one of the best live shows this year for me, and many others I reckon. It ticked every box for a mosh-till-your-body-drops and scream/sing until your voice dies. All three bands on the bill contributed to my complete satisfaction and I hope you had a chance to catch this one in your hometown as well. If not, you still have time. The Second Leg of North American “Cryptoriana” Tour doesn’t end until April 18th in Texas.
So hurry now and catch them in your backyards before Hell calls them back home. 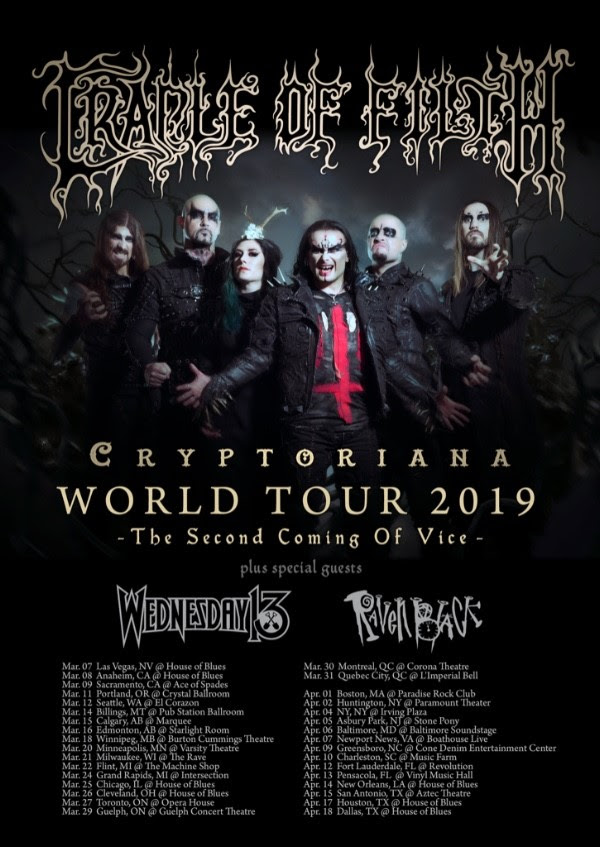 Don’t forget to go follow all these guys and gals on their social profiles.

The Duke of Spook and his devilish ghouls, WEDNESDAY 13, will return to the road later this year for their headlining “NEAR DARK TOUR,” with special guests THE HAXANS, in support of their recently released album, “Neccrophaze,” […]

CRADLE OF FILTH Reveal The Title Of Their New Album

Poisonous Dark Metallers CRADLE OF FILTH reveal the title of their forthcoming 13th studio album as being Existence Is Futile. Their monumental new opus -the 13th (unlucky for all) studio album of the band […]