French synthwave icon Carpenter Brut has released his brand new single “The Widow Maker,” which features Alex Westaway of Gunship who lends his voice on the pummelling synth pop track. It’s the latest song to be taken from Carpenter Brut’s forthcoming album Leather Terror, out April 1 via Universal Music. The album is available to pre-order now HERE.
The dramatic video for “The Widow Maker” was directed by the Deka Brothers and stars actor Dylan Sprouse as Bret Halford aka Leather Teeth, the protagonist of Carpenter Brut’s album and singer of Leather Patrol.
See the video for “The Widow Maker” HERE.
Leather Teeth is a true rock star and a ruthless avenger, who inflicts vengeance on those who stand between him and what he desires. Bret flicks through the yearbook, and overcome by hallucinatory delirium, he fantasizes about getting his revenge on Kendra, the cheerleader he was madly in love with at high school, and the jocks she preferred. His desire for revenge ends up turning against him and he becomes haunted by the corpses of those he wishes to send to an early grave.
Speaking about the video collaboration, Dylan Sprouse says, “I sent Carpenter Brut a comic I made with a note that read, ‘As I’ve written the entirety of this comic series with your music on repeat, I felt it only natural to send you this. I owe it to you.’ That was the first time we communicated and I believe we found ourselves to have some shred of creative kinship in our different mediums since then.”
Sprouse adds, “Over a year of us chatting back and forth about finding an opportunity to collaborate on something together, he hit me with the idea to portray Bret Halford in a video of his with the Deka Brothers as directors. We chatted character, background, content and I was all in immediately. Especially because it gave me the opportunity to take out some aggression with an oversized buck knife and some confetti cannons after a few short days of filming, a lot of running, a lot of stabbing, a lot of spiked studs, platform boots and a sprained ankle during a ‘bad drug trip’ scene. I hope you all get as pumped up watching this as I was filming it. Long Live Bret Halford.”
Regarding the single, Carpenter Brut says, “While talking with a musician friend of mine, he said, ‘This song, it makes you want big guitars like Rammstein.’ Inwardly, I ruled out the guitar option, but for the vocals, his idea worked for me and I thought it would be cool to have a big industrial voice on this track, like Till Lindemann for example, but in the end I asked Alex Westaway (from Gunship) to sing on it. It’s nothing like Lindemann vocally, but I love Alex’s androgynous register a la Brian Molko and what he did with the song.
“There was this interesting ambivalence, even paradoxical between the martial side of the music and Alex’s voice, which is quite pop, which makes this track both industrial and synth pop. As usual with the singers I work with, I gave Alex a word or two, a theme, and then he came up with his own lyrics. I really like this song, because for me it’s Carpenter Brut with a mainstream feel.”
“The Widow Maker” follows the release of Leather Terror’s lead single and colossal synthrock anthem “Imaginary Fire” earlier this year, which features guest vocals from Greg Puciato of The Dillinger Escape Plan.
Leather Terror is the second in Carpenter Brut’s Leather album trilogy, the next chapter following his widely acclaimed 2018 album Leather Teeth. That album featured in numerous Best Album lists across the board of rock, alternative and electronic music that year. Kerrang championed the mysterious French artist as one of the Best Live Bands On Earth whilst Carpenter Brut was also honoured as a performer at the Metal Hammer awards.
While Leather Teeth was in part a celebratory take on ‘80s glam rock, in his new opus, Carpenter Brut – across the space of twelve tracks – gets more malevolent, documenting the rise of his protagonist as a serial killer who wants to take revenge on all those who mistreated him when he was younger.
Leather Terror reflects both a serial killer, and an artist, in their prime: Bold and daring while full of shock and awe, creating a true spectacle out of great darkness with a flamboyant disregard for rules. 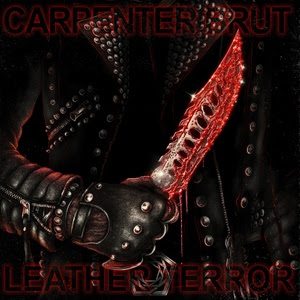 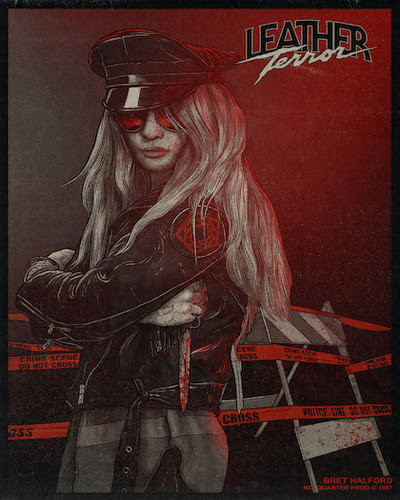 About Carpenter Brut
Carpenter Brut draws its influences from ‘80s TV shows and B-movies loaded with synthesizers. The mysterious and discreet man evokes an encounter between Justice beats and the universe of John Carpenter. The French act pays tribute to the post-hippie/pre-AIDS culture that then set the basis of electro and metal to give us a unique, violent and crazy ‘80s revival sound. Over the last decade he built a successful career, as a major act from the darksynth scene. He has toured the world with acts like Ghost and Ministry and performed at well-known festivals such as Coachella & SXSW, and has accumulated 366 million streams of his music worldwide.
Find Carpenter Brut Online
Website: https://carpenterbrut.com/
Bandcamp: https://carpenterbrut.bandcamp.com/
Facebook: https://www.facebook.com/carpenter.brut
Twitter: https://twitter.com/carpenter_brut
Instagram: https://www.instagram.com/carpenterbrut/?hl=en
YouTube: https://www.youtube.com/channel/UCPVnLrkvF3M_H1NTOsMvgrA