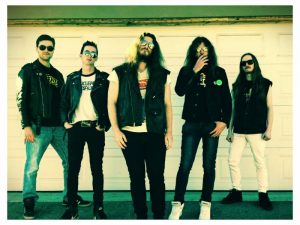 Fresh off their split with Finland’s CORONARY, Canada’s TRAVELER will release their self-titled first full-length on February 22 via Gates Of Hell Records. Recorded at three different studios throughout 2018, Traveler will feature eight songs of up-tempo, classic metal, right up the alley for fans of vintage JUDAS PRIEST, MANILLA ROAD and

According to guitarist and founding member Matt Ries, Traveler will certainly appeal to fans of their debut demo and split with CORONARY. The three songs from their demo have been re-recorded and given new life thanks to TRAVELER’s now-complete lineup, a first for the band. “To have this become a reality is amazing,” he says. “I’ve learned a lot about who you jam with and not settling for anything less than the best. I’ve also learned how much work comes behind taking the reins on everything, but it’s all worth it.”

TRAVELER, who are now rounded out by vocalist Jean-Pierre Abboud (also of GATEKEEPER), second guitarist Toryin “Junior” Schadlich, bassist Dave Arnold and drummer Chad Vallier, tracked drums at AB Records, guitars at Ries’s home studio and vocals at Richhobo Studios. In all, their self-titled album shows just how far TRAVELER has come in the span of a year, with the re-recorded songs from the demo blending seamlessly with the band’s new compositions.

“The newest songs all vary differently from each other,” says Ries. “We feel this will make for a really interesting album. But, of course, the album has no shortage of dueling guitars and powerful vocals. And, after hearing the vocals laid out for the first time over these songs, I can safely say they all pound just as hard! The lyrical themes are mixed with real life experiences and total exaggerated scenarios. Ripping leads and harmonized guitars. Driving bass lines. Everything I love to hear when I throw on a record. So, if we share the same taste, you’ll be raising your fist.”

TRAVELER, who originally started as an outlet for ideas that weren’t suitable for Ries’s other bands GATEKRASHÖR and HROM, has enjoyed a year that has gone far beyond the guitarist’s expectations. Starting with the positive feedback from their split with CORONARY to the writing and creation of their full-length debut album, TRAVELER has capably handled the whirlwind that was 2018 and now has their eye toward 2019.

“This year has been a really exciting experience,” says Ries. “It’s also been extremely challenging getting everything together. Our love for the music has kept us on the right track. However, the feedback from everyone has lit a fire under our asses to make the best possible record. I didn’t expect to be working under such a great label so soon. Again, all of this has been nothing but motivation to keep moving. Now that we are wrapping up the year, we are focused on making a great live show for everyone! We can’t wait to rock the stages for all of you. We have a lot of great plans in the works for shows and future projects. So, the way I see it, we’re just getting started. FEEL THE REIGN OF STARBREAKER!”

“Traveler’s debut is a towering example of modern trad and an early-strong-contender for album of the year 2019.” [9.5/10]

“If you love melodic twin guitar soloing akin to the legends like Iron Maiden and Judas Priest, then this is the album for you. The guitars just rip and shred on this record!” [8/10]