VIA THE FUEL MUSIC

“UP is a positive song when so many things seem down; it’s about things looking up and getting better” – Rick DeJesus, Adelitas Way

Las Vegas-based alternative rock band Adelitas Way fuses with Minneapolis-bred modern hard rockers New Medicine for the energetic hybrid “UP” releasing today (March 18) to Rock and Alternative radio internationally along with digital and streaming outlets worldwide via Vegas Syn / The Fuel Music. The song finds the bands reveling in the rewards and sense of accomplishment that follows the blood, sweat and tears of hard-won victories.

An anthemic rager for today’s laborers, adventurers, creatives and all those fighting for and achieving a better future, “UP” was written by the lead vocalists for Adelitas Way, Rick DeJesus, and New Medicine, Jake Scherer (aka Jake Rose). Scherer also produced the single that was mixed by GRAMMY Award-winning Neal Avron (Twenty One Pilots, Sara Bareilles, Fall Out Boy).

“’UP’ is a positive song when so many things seem down; it’s about things looking up and getting better. Put your time, energy and effort into your passions and things you love,” suggests DeJesus, whose own work ethic has seen his band rack up over 350 million streams to become one of the most streamed independent artists in the world.

“All the great things we aspire for in life take hard work,”  continues DeJesus. “’UP’ is about all that hard work paying off if you just stay resilient, fight hard, battle through.”

“I haven’t been this excited about a song in a long time,” adds Scherer, whose own band has garnered over 140 million streams. “I knew when Rick and I wrote ‘UP’ we had something special. We like to see the positives in life and look on the bright side. Coming out of a pandemic, both of us felt like we all had so much to look forward to and we wanted to write a song that felt like that. We’ve also both been through lot in our careers, and now we are two independent bands finding success on our own. Things are definitely looking up.”

Adelitas Way and New Medicine also join forces for a live studio performance video of “UP” presented by Blvckbox Studios and directed by Mason Wright and DC24 Frames.

Taking the new single and its bevy of hits on the road, Adelitas Way recently wrapped a 45-show run with Skillet and is currently headlining its 19-city “Rivals” tour featuring special guest Gemini Syndrome. The “Rivals” tour began last month and leads up to an Adelitas Way hometown finale at Hard Rock Live Las Vegas March 25.

“Our ‘Rivals’ headline tour has been so much fun so far!” exclaims DeJesus. “So many exciting shows to come…thank you to our amazing fans for the love and support!” 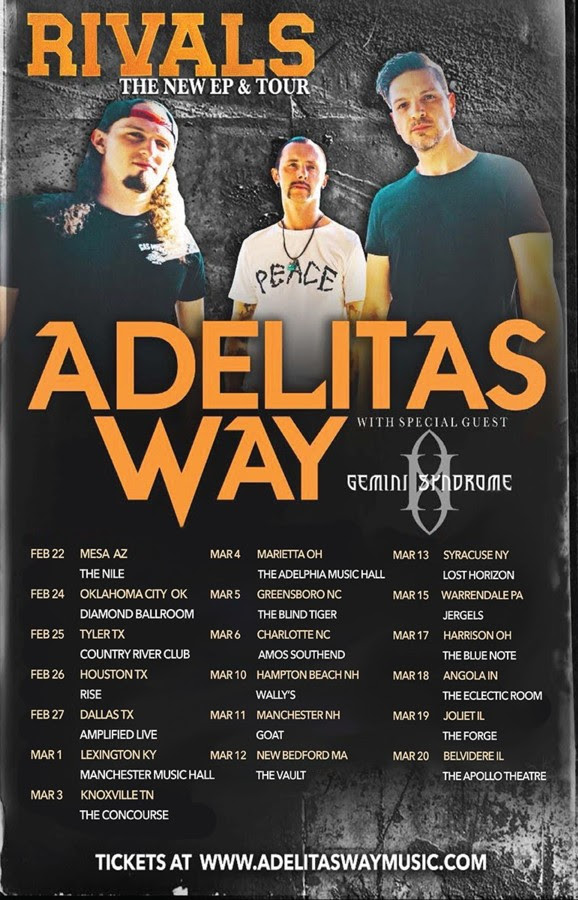 Along with its own headline tours and mainstage appearances at the biggest Rock festivals in the US, including Rock on the Range, Carolina Rebellion, Louder than Life, RockFest KC and Rockville, the band has also toured with Guns N Roses, Shinedown, Creed, Skillet, Three Days Grace, Halestorm, Theory of a Deadman, Breaking Benjamin, Staind, Alter Bridge, 10 years, Buckcherry, Hinder, Flyleaf, The Pretty Reckless and more.

Formed in 2009, New Medicine delivers modern hard rock that blends the drive of rock with the emotion of post-grunge with a hip hop flair, giving them a rowdy, slick sound that mixes equal parts swagger and sulkiness. New Medicine made their debut in 2011 with Race You to the Bottom (Photo Finish/Atlantic Records) which earned them a top spot on the Billboard 200. Their sophomore album Breaking The Model (Imagen Records) released in 2014 and found a massive audience, garnering more than 65 million streams on Spotify alone. New Medicine has extensively toured the U.S. with bands like Avenged Sevenfold, Halestorm, Disturbed, Hollywood Undead, Papa Roach and many more. The band took a hiatus in 2015 but released a new single, “Die Trying,” in 2020 and have since released three more hits, including “Own It,” a collaboration with former tour mates Adelitas Way. New Medicine is back making music in the studio and plans on a new EP to be released in 2022, along with some select reunion tour dates.

About The Fuel Music:

Established in 2008, The Fuel Music & Management, LLC, is a leading artist management and artist solutions company that independently distributes music internationally. Based in Nashville, TN, the Fuel team brings well over 70 years of combined music industry experience in record label operations, major label distribution and marketing, and artist management for artists ranging from upstart bands to GRAMMY Award-winning, multi-Platinum artists. More information on the company can be found at www.thefuelmusic.com.

Harrisburg, PA based Heavy Rock band ETERNAL FREQUENCY has released a dark, cinematic, sci-fi imbued official music video for their newest single, “Step Up.” Produced by Carson Slovak and Grant McFarland of Atrium Audio, the music video for “Step Up” was directed […]